In this post we walk through how to interpret your ComEd bill once you begin net metering, and how the information on your bill compares to the data you see in your solar system monitoring account. To learn about what net metering is and how it works, check out our introductory blog post.

Your ComEd Bill with Net Metering

When you go solar, you use the energy your solar system produces and then, if you need more (at night or on a dark day), you pull energy from the grid. Most people think of their total energy usage as their solar usage plus their ComEd usage; however, ComEd only reports on energy that flows through their meter. Because you use the energy from your solar system directly, without it passing through ComEd’s meter, the “Total Usage” section on your ComEd bill reflects only your total ComEd usage and does not include your additional usage directly from your solar system. 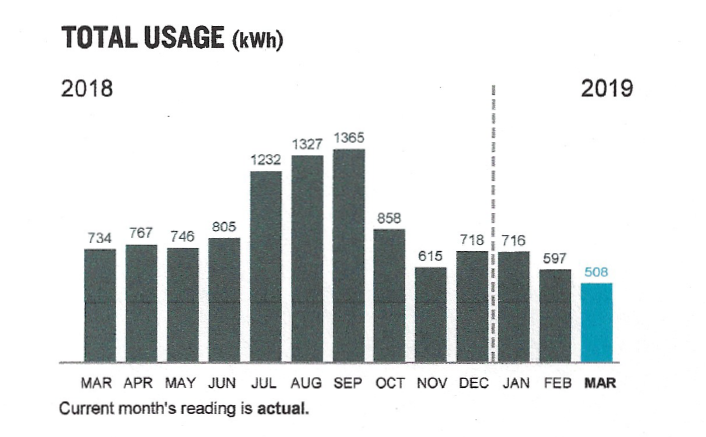 In the sample bill above, “Total Usage” is reported at 508 kWh in March of 2019. This means that in addition to any energy used from the solar system, this home also used 508 kWh of energy from ComEd. It is normal to see some amount of energy usage from ComEd, because the home pulls energy from the grid at night when the solar system is not producing. Note the usage of 734 kWh in March of 2018. It would be very surprising if the true total energy usuage of the home dropped by 30% from one March to the next. Most likely, this home consumed about the same amount of energy in March of 2019 as it did in March of 2018. Thus, the difference here is the result of the customer now getting a portion of their energy directly from their solar system (without that energy flowing out to the grid).

In addition to showing how much energy the home used from the grid, the ComEd bill also shows how much excess energy the solar system produced, did not use, and sent out to the grid.

In the “Meter Information” section of the bill, the usage from the grid (508 kWh) is repeated, and an additional line shows the amount of energy that was sent to the grid. On days when the solar system produced more energy than the home demanded, the home used what it needed first and then sent the excess, in this case totalling 524 kWh from 2/8 through 3/11, back to the grid.

The “rollover” amount of energy or net metering credits earned for future use is the balance of the energy sent to the grid minus the energy used from the grid, in this case 16 kWh. This is noted in the “Miscellaneous” section of the bill.

Even with solar panels, you will continue to pay a fixed delivery charge on your bill each month for the convenience of being connected to the grid (which is necessary for net metering). Your supply charge, on the other hand, is the portion of your bill that should begin to go down as your solar system begins to generate much of the energy you need.

The “Current Charges” section of the bill (top right of image) shows the delivery charge is $16.46 and taxes and fees are $0.11. Combined, they equal $16.57 (center of image). However, the supply charge (top left of image) is now $0: this customer bought net zero kWh from ComEd.  Thus, thanks to this customer’s productive solar system and net metering, they fully offset their energy usage (and even earned some additional credits for future use).

Certasun customers can view their home’s true total energy usage (grid usage plus solar usage) in their EnergyLink monitoring account. If energy is produced by the solar array and immediately consumed by demand from the home, nothing flows through ComEd’s meter – but it is still measured by EnergyLink. EnergyLink reports 686.2 kWh for “Total Energy Used” in the example home throughout this period. “From Solar” is the total amount of energy produced by the solar system, 730.9 kWh in this example.

Reconciling Differences Between EnergyLink and ComEd