Mike Carroll, Certasun’s newest solar advisor, helps homeowners in Bourbonnais and the surrounding south suburbs figure out how much they can save by going solar. He can be reached at mcarroll@certasun.com or (815) 450-5077.

Mike, what’s your role at Certasun?

I’m a Solar Advisor for Certasun. I guide our customers through the process of going solar and give advice about the economics of solar for each home. As a solar advisor with a rich tenure in construction and Building Science, I hold a unique role that also allows me to aid customers in improving their home’s overall energy efficiency in addition to going solar. If you’re wondering how you can make your home more efficient, I’m happy to be a resource. 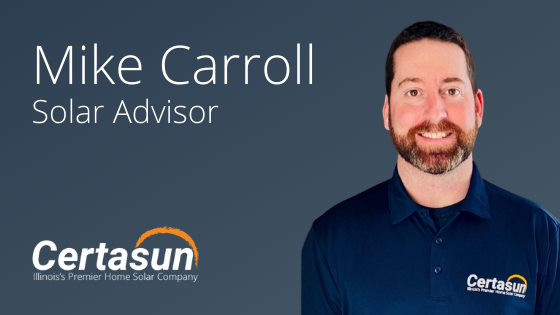 Why did you choose to work with Certasun?

After much research into residential solar in Illinois, I found that most solar companies would not service my southern suburban home in Bourbonnais. Certasun’s commitment to serving local communities was such a breath of fresh air. I was also drawn to Certasun’s No Surprises Guarantee, which states that they will not outsource installations to a subcontractor. So Instead of gambling on the skills of an outside installation crew, Certasun trains and vets their own in-house installation team to be one hundred percent certain of their skills. As an experienced contractor myself, I needed a company whose contractors I could trust would treat my home as if it were their own.

After the housing crisis in 2008, I decided to diversify my skill set beyond what the typical residential construction company provides. I immersed myself in the world of Building Science, where I developed an interest in the way past coding regulations differed from, and were inferior to, our current coding standards. Specifically, energy code and accessibility to residential solar in Illinois.

What do you think is the best reason for Illinois homeowners to go solar?

In addition to the massive incentives offered at the state and federal levels, going solar makes a positive environmental impact for our future generations. Anything we can do to teach our little ones about taking ownership of their carbon footprint is important. But of course, having over 50% of your final system cost covered by a state incentive and a federal tax credit is certainly worthwhile.

A special note from Certasun:

After our interview with Mike, we were awestruck by his love for the industry and how it can help benefit the folks in Bourbonnais. Having grown up in the area, Mike’s love of home has turned into a deep desire to serve his community and environment. After experiencing such a challenge finding solar opportunities for himself, Mike wants to help his local peers connect with Certasun.

In his free time, Mike coaches little league for his six-year-old daughter. Having coached his oldest son until the age of 12, Mike is confident that his four-year-old son is going to be a natural once he’s grown enough to play. When Mike isn’t actively engaging with his community, he loves grilling, playing bags, and trying new recipes on his favorite cast-iron skillet.

Get A Free Quote from Mike!

Please fill out the form below